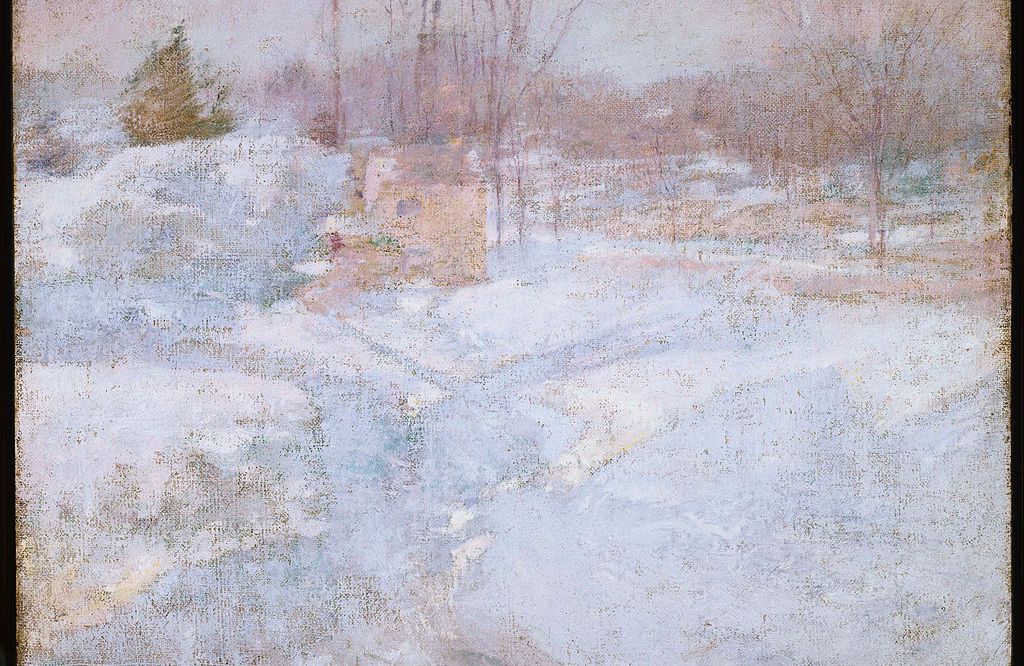 John Henry Twachtman was born in Cincinnati, Ohio, August 4, 1853. He is known for his impressionist paintings which embraced an experiential, even personal element. Known to be outgoing, he also had moments of deep contemplation. His moods between restlessness and serenity allowed his creative energy to explore painting, etchings and drawings in pastel.

“Winter… that feeling of quiet and all nature is hushed to silence.”

Europe beckoned a young John Henry. First stop, Munich, where he studied at the Academy of Fine Arts from 1875 – 1877. Venice came next, when he met up with his friends and fellow painters, William Merritt Chase and Frank Deveneck. I can only imagine these three artists getting lost in the streets of Venice.

After a short visit home, John Henry traveled to Paris where he studied at the Academie Julian from 1883 – 1885. Several years later in 1893, he would exhibit his work with Claude Monet at the New York Gallery.

John Henry had many friends. He belonged to a group of American painters known as “The Ten” who exhibited their work as a unified group. Formed in 1898, Childe Hassam, J Alden Weir and John Henry Twachtman were the driving force behind this creative alliance that was to remain vital for the next twenty years.

At the age of 49, on August 8, 1902, John Henry died of a brain aneurysm. His work lives on in museum collections – National Gallery of Art, Washington, Museum of Fine Arts, Boston, Metropolitan Museum of Art, New York. He influenced artists that came after him: Katherine Langhorne Adams, Annie E.A. Walker, Louise Zaring and Ernest Lawson.

“In my mind I have finer pictures than ever before. Ten thousand pictures come and go every day and those are the only complete pictures painted, pictures that shall never be polluted by paint and canvas.”