“Fashion shouldn’t just be about the present. I care more about the meaning behind the details.  Therefore, the embroidery and motifs you see on my clothing all have stories behind them.”

Guo Pei is a storyteller, first and foremost.  Her stories are not given with words that are written with pen and paper. They are created with the artistic energy and flare of embroidery and bead-work that adorns her exquisite couture collections.

The Vancouver Art Gallery exhibition was a testament to one woman’s perseverance and determination to revive an ancient art deeply rooted in tradition. Guo Pei’s vision of storytelling ignited a passion in others to share their knowledge, experience and love for the art of embroidery.  Guo Pei’s fashion is sensational for its beauty and glamour. Her most profound achievement is her influence in creating a place where art can flourish. A new generation of embroiderers have come together to give honour to their profession, culture and heritage.

The Samsara collection of 2006 was inspired by Samsara, a word in Sanskrit that refers to the continuous cycle of life, death and rebirth.  An Amazing Journey in a Childhood Dream, launched in 2008, gave joy and rebirth to the fairy tales of childhood. The 1002 Nights collection of 2009 came from Middle Eastern folktales that we know as Arabian Nights. The Legend of the Dragon, launched in 2012, captured the splendor and elegance of China’s mythology and showcased the Chinese zodiac pantheon.

“Guo Pei: Couture Beyond,” allowed visitors to experience the exuberant spectrum of visual narratives held within the folds of shimmering cloth.  There was a quiet reference throughout the gallery as visitors embraced the joyful sophistication of the exhibition. Each piece was an affirmation and tribute to skilled artists working together, side by side, patiently, with focused diligence.

Guo Pei was born in 1967, in the city of Beijing. By the age of two, she helped her mother sew winter clothes.  This marked the beginning of her love of dressmaking, which turned into an extraordinary journey of revitalization.

“By 1881 there were 1,050 people – primarily young girls- in the East China city of Suzhou alone engaged in embroidery. However, in 1997, when Guo Pei set off to open her own atelier, Rose Studio in Beijing, she struggled to find skilled embroiderers able to bring her creations to life.” Vancouver Art Gallery Exhibition

To fulfill her vision, Guo Pei would go door to door to find skilled embroiderers.

“Guo Pei had heard that in the Hubei province there remained a group of craftspeople who had embroidered for the royal family, so she journeyed to central China knocking on the doors of homes with embroidered curtains.” Vancouver Art Gallery Exhibition

“With the aide of the women she met there, Guo Pei trained a new generation of embroiderers and has built at atelier that employs more than 500 workers including skilled artisans and technicians. Together, they produce three to four thousand custom garments each year Vancouver Art Gallery Exhibition 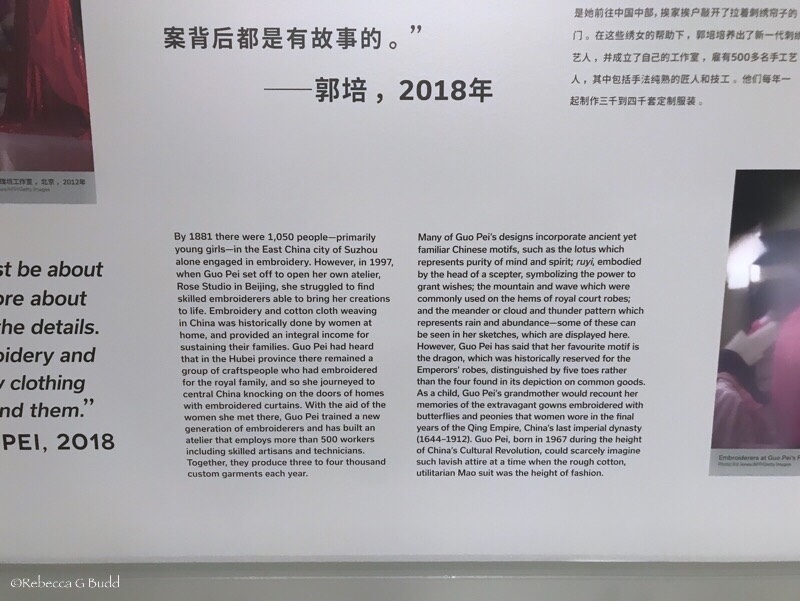 It was a privilege to see the Guo Pei Beyond Couture exhibition and be inspired to give voice to my personal creative journey.

Guo Pei from Rebecca Budd aka Clanmother on Vimeo.

Guo Pei: Couture Beyond is the first Canadian exhibition devoted to the work of Guo Pei, China’s preeminent couturière. This mid-career survey features more than forty complete looks from Guo Pei’s most iconic runways from 2006 to 2017. In her theatrical, extravagant creations, Guo Pei combines contemporary aesthetics, production methods and materials with ancient tradition, evoking Chinese history and mythology in her craft techniques, fabric selection and imagery. The exhibition provides a comprehensive overview of her evolution as a designer as well as her contribution to global fashion culture. Vancouver Art Gallery

21 thoughts on “Guo Pei: Couture Beyond”